Shipmanagers predict surge in fatalities in preparations for IMO 2020 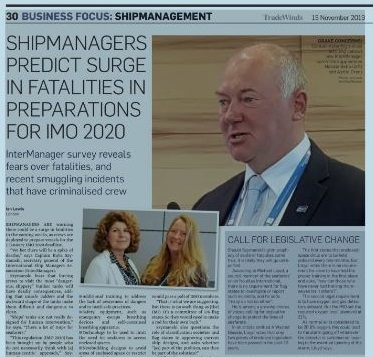 Shipmanagers are warning there could be a surge in fatalities in the coming weeks, as crews are deployed to prepare vessels for the 1 January IMO 2020 deadline.

“We bet there will be a spike of deaths,” says Captain Kuba Szymanski, secretary general of the International Ship Managers Association (InterManager).

Szymanski fears that forcing crews to visit the most “dangerous, slippery” bunker tanks will have deadly consequences, adding that unsafe ladders and the awkward shape of the tanks make them difficult and dangerous to clean.

“Ships’ tanks are not really designed for human intervention,” he says. “There a lot of traps for seafarers.”

“This regulation [IMO 2020] has been brought up by people who do not necessarily think with [a] human-centric approach,” Szymanski says.

The IMO has stipulated that oxy­gen meters should be installed on ships to avoid deaths in enclosed spaces, however, many observers deem this a limited measure.

Fears over fatalities in the run-up to IMO 2020 was one of the key safety concerns highlighted by InterManager in October when it asked its members: “What keeps you up in the middle of the night?”

The concerns are not new and InterManager believes there are simple actions shipowners could take to ease their worries.

The respondents called for:

Clearer identification of hazardous spaces, with access restricted by senior management onboard ship and ashore.

Additional training to address the lack of awareness of dangers and to instil safe practices.

Technology to be used to limit the need for seafarers to access enclosed spaces.

Newbuilding designs to avoid areas of enclosed space or restrict them to a minimum.

Other safety issues highlighted by survey respondents included cuts to crew numbers, with shipmanagers distinguishing between “operational” and “safe” manning levels; faulty lifeboat equipment and the misdeclaration of dangerous cargoes.

Survey respondents accused flag states of participating in “a race to the bottom” in terms of cuts to crew numbers. Cuts may help outfits to be more competitive, Szymanski says, but jeopardise safety and maintenance onboard vessels.

“A small crew might get a vessel from A to B, but will not maintain and run it properly,” Szymanski says. “We do a lot of other jobs. We are firefighters, doctors, accountants, maintenance workers.”

InterManager wants the IMO, instead of flag states, to establish safe manning levels, but Szymanski doubts such a rule change would pass a poll of IMO members.

“That is what we are suggesting. But there is no such thing as [the] IMO. It’s a committee of 176 flag states. So they would need to make a rod for their own back.”

Szymanski also questions the role of classification societies and flag states in approving current ship designs, and asks whether “[as] part of the problem, can they be part of the solution?”

While safety concerns dominate the debate in the run-up to IMO 2020, another issue to rear its head recently has been the criminalisation of seafarers, Szymanski says.

The latest incident involved the crew of the 32,000-dwt UBC Savannah (built 2000), managed by Intership Navigation, which was detained in Altamira, Mexico, after 225 kg of cocaine was found in one of the holds.

The crew reported the contraband to police immediately, but they and the captain were arrested.

“We are 99% sure that our guys are innocent — and definitely innocent unless proven guilty,” Szymanski says. “But every time it is the other way around — the onus is on us to prove that our crew is innocent.”

Szymanski says countries are ignoring IMO guidelines on how to conduct investigations into such incidents, and that seafarers are often in a weak position as foreigners to obtain legal assistance.

Other concerns highlighted by survey respondents include paperwork, which Szymanski says can be overwhelming, digitalisation and vetting procedures.

Areas where the administrative burden could be eased onboard ships is the documentation required when seafarers go ashore, and by creating a central repository.

But, Szymanski says, the European Union’s Single Window, which was introduced in 2015 to relieve the burden on seafarers, has only increased the amount of paperwork.

“We’re trying to talk to IT guys to be more human-centric,” Szymanski says.

Shipmanagers are also frustrated by the application vetting regimes such as RightShip’s star rating system, which they claim lacks transparency.

Another looming issue is gender equality. It is not something that appears to worry shipmanagers yet, but, as 2% of seafarers now are women, it will likely be a concern in the future.

The recent appointment to InterManager’s executive committee of Natalia Bello of Sovcomflot Cyprus and Astrid Drent of Netherlands-based MF Shipping is one small step to addressing this issue.